The Atlatl
as Depicted in Ancient Rock Art

The history of atlatls in the new world has been recorded in stone thanks to generations of native artists who have set down images of this important hunting device in the rock art record.

Only three locations of rock art are know depicting atlatls. In West Texas, along the lower Pecos River there can be found several sites depicting atlatls. Two rock art sites are recorded in the San Juan River drainage of southeastern Utah. In both of these sites the atlatls depicted do not show weights attached to the weapon. The third and by far most prolific collection of rock art showing atlatls is in the desert ranges of southeastern California and Southern Nevada.

The largest concentration of these sites occur in the Coso Mountain Range where the greatest number and earliest drawings can be found. Images of both hunters with atlatls and atlatls drawn by themselves are present. More than 300 individual drawings have been recorded.

How long have atlatls been present in this area? Atlatl dart fragments from the Leonard Rock Shelter in Nevada give a radio carbon date of 7038 +/- 350 years ago. Other dry cave sites have yielded similar results.

The most intriguing aspect of the atlatl images is the depiction of highly stylized and greatly exaggerated stone weights attached to the atlatls. These weights have been found across the United States, and for many years there use were unknown. Called 'Boat stones' or 'Banner Stones' because of there shapes, they were usually well made and often polished. The function of these stones is a matter of great discussion and some contention. Many theories expound around the purpose of the stones: balance weights, sound silencers, performance enhancers, and charmstones. When looking at the rock art record, the extreme disproportion of the size of the stone in relation to the atlatl leads this writer to the conclusion that the primary reason for the attachment of theses stones was as a charmstone, to bring luck to the hunter. Marginal improvement to the performance of an atlatl/dart system can be measured but taking into consideration the prolific use of charmstones of all shapes and sizes by most of the native peoples of the world, and especially well documented examples and oral histories in California and the Southwest, the charmstone conclusion appears to be the most valid. We will never truly know. 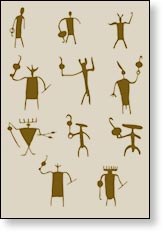 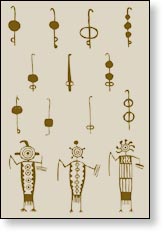 The images of the atlatls by themselves show the complex variety of styles and combinations of finger grips, hooks and weights that have been used or at least illustrated during the 3000 year old rock art record by the ancient peoples of the area. The images of the hunters also reflect the changes in rock art styles from the simple early drawings to the later more detailed images including depictions of complex headdresses in the later part of these atlatl hunters history.

The three patterned body anthropomorphs shown appear to be holding atlatls and darts. Although these images post date the introduction of the bow and arrow by many hundreds, perhaps thousands of years, some theorize that the atlatl was kept alive in the culture in a symbolic form. The rock art record supports this, as other instances of atlatl images can be found in later post bow and arrow images.

Regardless of the actual meanings of the vast numbers of atlatl images drawn by these ancient peoples, an unbreakable connection to the past is created, so that every time modern atlatl practitioners heave a dart, these stone images, for an instant, are alive again.

A Field Guide to Rock Art Symbols of the Greater Southwest, Alex Patterson

Tours of the Coso Range petroglyphs are given by the Maturango Museum in Ridgecrest California. They may be contacted through their website at : http://www1.ridgecrest.ca.us/~matmus/. They also have many books and resources available for those interested in the rock art presented here.

More information about the Atlatl: http://www.atlatl.com/archeology.html

We hope the information on the PrimitiveWays website is both instructional and enjoyable. Understand that no warranty or guarantee is included. We expect adults to act responsibly and children to be supervised by a responsible adult. If you use the information on this site to create your own projects or if you try techniques described on PrimitiveWays, behave in accordance with applicable laws, and think about the sustainability of natural resources. Using tools or techniques described on PrimitiveWays can be dangerous with exposure to heavy, sharp or pointed objects, fire, stone tools and hazards present in outdoor settings. Without proper care and caution, or if done incorrectly, there is a risk of property damage, personal injury or even death. So, be advised: Anyone using any information provided on the PrimitiveWays website assumes responsibility for using proper care and caution to protect property, the life, health and safety of himself or herself and all others. He or she expressly assumes all risk of harm or damage to all persons or property proximately caused by the use of this information.